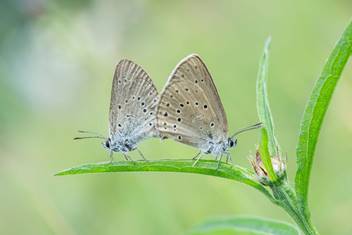 Colony of ants is a perfect place for many organisms to live - it provides a safe shelter and food resources. Organisms that use the resources of social insect colonies like ants, are called social parasites, and a good example of such organisms are obligatory parasitic Maculinea butterflies. The larvae of these butterflies in order to get inside ant nest and then integrate with the host colony have to break the code that is used by the ants to distinguish the individuals from their colony from strangers. Such a code is a specific odor determined by a mixture of chemical compounds, called cuticular hydrocarbons (CHC). In addition, butterfly larvae are able to imitate the sounds produced by their host ants to communicate with each other.

Maculinea butterflies possessing such a complex life cycle and numerous adaptations are very vulnerable to environmental changes and extinction. Many of these butterfly populations have disappeared in recent decades, but fortunately, a few successful reintroductions have also been successfully carried out. One such example could be the reintroduction of the butterfly Maculinea teleius, which took place in the Netherlands in 1990 where butterflies from Polish population were translocated. The difference, currently almost 30 generations of butterflies, between the Polish (source) and the Dutch (reintroduced) population gives us a great and unique opportunity to study changes in butterfly adaptations to their local  habitat and local host ants.

In our project, we examine:

1) how the genetic structure of the reintroduced population has changed in comparison to the source population; we want to know levels of genetic variation and whether it is different in both populations studied.

2) We also study the morphological characteristics of adult butterflies as we know that both populations live in different habitat conditions, which in turn can affect the dispersal of butterflies. Differences in dispersal capabilities may be reflected in butterfly morphology, in e.g., thorax size, body weight or wing size and shape. To study this part we are using the method of geometric morphometric. Moreover, we possess samples of butterflies taken from Polish population in 1990. Such data allow us to detect changes not only between reintroduced and source populations but also understand whether any changes in butterfly wing pattern happened in the source population during 30 years. 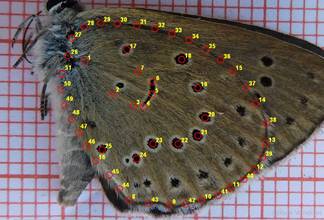 3) We also want to check whether and how the adaptations of butterfly larvae could have changed to be better adopted to their local host ants. Therefore, we plan to compare chemical profiles of cuticular hydrocarbons and sounds produced by butterfly larvae and host ants from the source and reintroduced populations. In addition, we will perform experiments to test butterfly larval adoption and survival rate in the colonies of ants from the same place of origin and in ant colonies from other populations. To test the of magnitude of potential changes in the source and reintroduced populations of M. teleius we will use other, outgroup, unrelated population of this butterfly and its host ants. 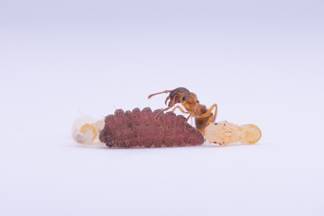 The knowledge that will be gathered due to our project will contribute to better understanding of important phenomena in evolutionary biology, such as relationship in the parasite-host system or the emergence of adaptation to local conditions. It will allow us to broaden our knowledge about ecology of butterflies, how the environment in which they live can shape morphological features related to dispersal. We can find out more about the systems of communication of myrmecophilic butterfly larvae and their host ants. Our findings can also have practical significance and they can be used as a guide to the reintroduction processes of Maculinea butterflies and other insect species whose life cycles are associated with ants.

Group of Social and Myrmecophilous Insects

Museum and Institute of Zoology, PAS